What if they held a tournament and no one came?

One of the benefits of living in Vegas is that I get to go to things that I otherwise would never travel for. This weeks example is the Diamond World Summit of Pool produced and promoted by the UPA. It is being held in conjunction with the ACS nationals at the Riv. I have to say that anyone who would actually fork out the dough to come just as a spectator would be really disappointed.

I was at the Riv on Monday the 1st to sweat my man John Morra playing a little snooker in the Can-Am challenge: 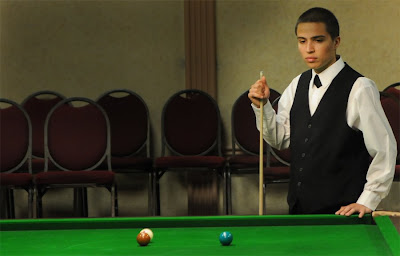 This pits four Americans vs. four Canadians in a snooker battle royale. It was fun just to watch the guys walk around the 6x12 football fields they call snooker tables. Needless to say Team Canada was whipping that USA ass. After sweating the snooker (or as Allison Fisher calls it: Snu-kahhh. God I love that word when an English female says it) I walked my nosy self on over to see how the pro set up was coming for this weeks event.

Here it is in the early stages:

The layout is simple and a bit optimistic as far as spectator seating but overall I like it. I like it much better than the clusterfuck that was the Predator World 10 Ball set up during the BCAPL nationals. That is the worst layout ever. Ever. After scoping it out I started looking for guys who would actually play the event. Aside from John and hearing that Rodney was in the house I was thinking we might just have the worlds smallest $20K added event.

Yesterday (Tuesday the 2nd) I went back to sweat the Pro-Am (whatever the hell that was supposed to be) which the UPA site said started at 8 PM with the player meeting starting an hour earlier. I get there at 7 when the player meeting was supposed to start figuring I could just wait if the meeting was closed. Imagine my surprise when I walk in and see Rodney hitting balls with 3 random fans in the stands watching and a few people at the TD's desk. That's it. I was like WTF??? To quote a friend of mine "I have been to 4 State Fairs, 3 goat ropings, and a donkey show but I ain't never seen no shit like this."

I talked to Rodney for awhile and shot some pics of his new John Showman cue. The cue is the triple nuts. John's work is just perfect, really no other word for it. Plus he is a big fat fucker just like me which really makes him cool in my eyes.

This is supposed to be a major event. Where is everyone? I know most of the guys are in Manila with an event coming up in China but I figured they would get at least 40 players here. I figured most guys were probably just late or blowing off the meeting so I went to eat. After dinner I walked back and ran ito this guy practicing: 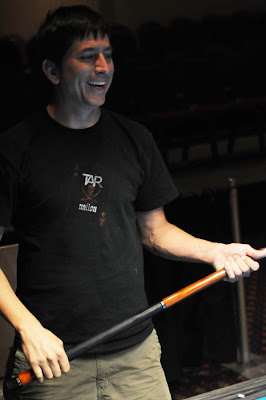 Mr. Stevie Moore is in the hizzy. Shit was looking up.

Stevie is one of my favorite dudes. He is hilarious and is a true killer when he is in the box or playing a tournament match as well as being a complete and total gentleman win or lose. After we caught up a little bit I put him on the spot:

Me: "When are you gonna get your ass back in action?"

We started breaking down who was there and he said the last he heard there were 31 paid entries and they were doing the draw as we were speaking. First round the next day was at 10 A.M. and Stevie didn't like that one bit. LOL He said "Hell, we only got 30 players. Why start so damn early. Who the hell is gonna be here to watch at 10 A.M. ?" I agreed whole heartedly. But what are you gonna do?

Oh yeah, that "Pro-AM"....never happened. I guess you need both Pros and Ams for that and both were in short supply. I want to say that I am happy to see anyone doing a $20K added event but I just wish it could have been scheduled better not to mention promoted better. Getting a $20K chunk of money invested is a big deal and to see it basically just put off in the corner as a side show to a minor league nationals event really sucks.

This is the first UPA event in 14 months. The last one was the star crossed Phoenix event where the top players got air barreled. Which I never did understand. The UPA is charging a $125 tour fee on top of the $300 entry for this event. What the fuck good is it to pay a $125 tour fee to an organization that can't guarantee you will get paid at one of their sanctioned events? But you do get a t-shirt and patch. The good news is I hear that no such bullshit will plague this event. The money is there. The fact that we even have to talk about it pisses me off though.

Fuck it. It beats nothing at all. At least some of the guys will get a payday even if it is in a gaffy format that gets drug out over 4 days. Oh yeah the format, 9 ball, race to 13, double elimination which is all cool. Here is where it goes off the rails: ALL BALLS MADE ON THE BREAK IN THE RACK END POCKETS SPOT BACK UP.( Got clarification on the corner pocket thing. It is just the 9 ball that spots if made in the top two pockets on the break) Three balls must go past the side pockets on the break. It makes my head hurt just thinking about all the bullshit that will come from this. Best part? The Diamonds they are playing on are ball return tables. No way to just reach in the corner pocket and pull out which ball went where. Someone will have watch which ball goes in the corners. It will be a goat fuck unless I miss my guess.

Of course the easy way to fix the wing ball going in every time in 9 ball is do what everyone else on the planet is doing: Play 10 ball. Fuck that. Makes way too much sense.

So I am going to go sweat the 10 A.M. round. It has been awhile since I could just sweat matches and shoot pictures and I plan on enjoying it to the fullest over the next couple days. Despite all the holes I can poke in the event and format at least Frank Alverez and company are doing something and that deserves some support and recognition.

My pick to win is Stevie or this guy: 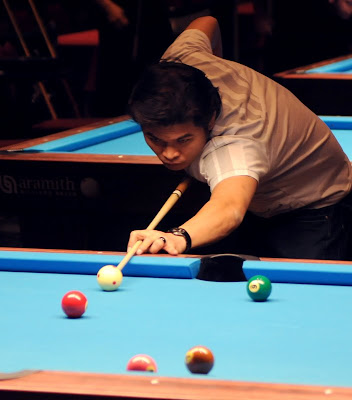 Extra points for you if you know who he is. I will post more about this extravaganza later.
Posted by Justin Collett at 7:35 AM

Justin Collett
I like pool, action, and the people I meet doing both. Love me some cameras too.