Well its obvious I suck at this blogging thing. At this pace I may get six or so done this year. I will be honest and admit the only reason this one is getting typed out at the very last second possible before the deadline is because one of the heavy hitters in the industry made it known in no uncertain terms that it would be in my best interest to just shut up and do this shit. Who wields such power ? Who intimidates men with but a few polite words ? Behold...... 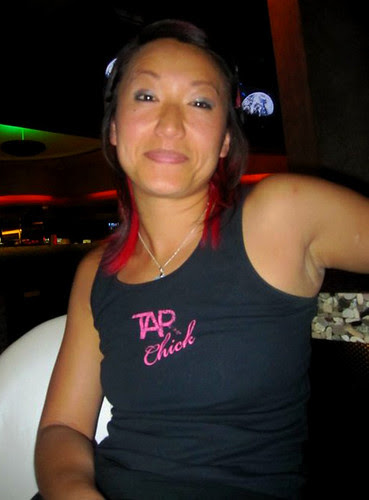 Ms. Samm Diep ladies and gentlemen. Don't be fooled by the sweet smiling face. Samm is a gangster. Ok..not really but Samm is really sweet and when she asked me to write something for this months PoolSynergy how could I refuse? I just had to remember my damn log in for this thing. On to this months topic...."Whats in your case and why?"

I should start out by admitting that I am a gear queer. Doesn't matter if it's IPSC shooting, photography, video or pool. I like nice gear and I like trying all different kinds of things to see if there something out there I like better. This means I have owned, tried, bought, sold and traded ridiculous amounts of cues and cases. I have ran the gamut from hauling around a 3x6 Justis full of crap that weighed as much as a Hyundai to a 1x2 Ron Thomas with one cue for everything. After years of switching constantly I have finally settled down a bit and have used mostly the same set up for about the last year or so.

In my old age I have taken on a bit of a minimalist outlook on things. This is shown in the case that I have been using for the last couple of years. It is a custom 2x4 made by IMO the best case maker in the world Mr. Jack Justis. I called Jack and asked him if he would make me a case with no pockets. I had never seen one of his 2x4's without pockets and thought it would have a nice clean look to it. There was a practical consideration as well. When I travel I put my case in the bottom of a duffel bag to check it. This means pockets get crushed because there is often a lot of crap on top of the case. I invariably lose any pool gadget in my possession anyway so there is no reason to carry a bunch of crap I will just end up leaving on a table at the Riv, Derby City or some pool room somewhere in the country never to be seen again. Besides when you play as bad as I do you dont really need a bunch of extra crap. My Justis: 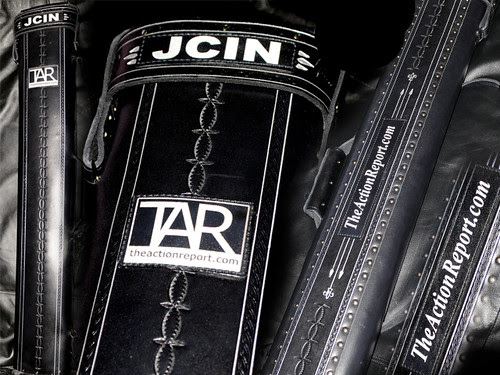 Jack did a fantastic job on the case. He lasered the TAR logo and "TheActionReport.com" on for me as well as making a nameplate with my internet handle on the lid. The JCIN was something I came up by combining my initials with my location at the time I created it which was Indiana. It is also a play on the fact that for most of my life half the people who see me everyday call me Jason anyway. There must be an innate need in peoples minds to convert Justin to Jason for some reason so I decided to just give them a good excuse.

I have a few cues that I rotate through depending on my moods. One of my favorites is made by Steve Lomax. It is a Nigerian ebony cue with double silver rings and a pimptastic genuine Ring Tail Lizard wrap. IMO you have to be careful with wraps as blingy as a Ring Tail. If you put them on a really fancy cue it can take it from cool to something that looks like you swiped it out of Kanye West's game room. For me the simple ebony cue balances it out nicely. The shaft has an ivory ferrule with a Kamui Black Super Soft tip and a taper that would make Earl proud. The cue plays great and is one that I will not be letting go of. 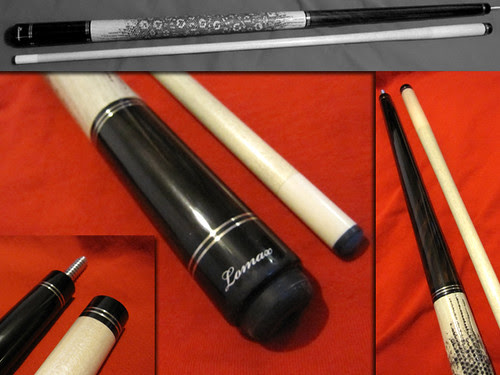 I also have one of Steve's famous jump cues but mine comes with extra bad assedness added. Steve made this as a special 1 of 1 for us to raffle off at the Derby last year. It has a custom logo we designed together by combining his logo with ours. It is also signed and dated one of one by Steve. Everyday at Derby I looked at the thing and lamented the fact that the one person who had no chance to own it was me. A fine gentleman named Bill Trimble won the cue and because he saw the lust in my eyes for it he was kind enough to work out a trade deal with me. So thanks to Steve and Bill I have the jump cue that John Wayne would of used. 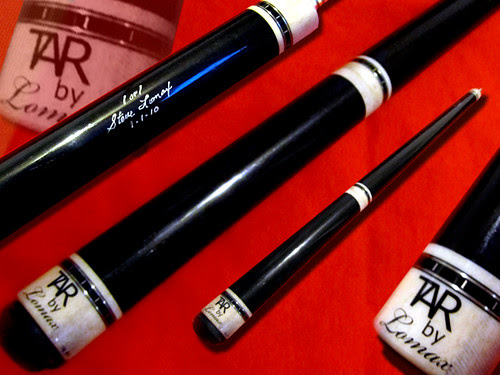 One of the other cues that sees a lot of use is a slick little sneaky made by my buddy Eric Crisp of Sugar Tree Cues. He made it from a Dufferin blank and added one of his signature "Razor Wire" rings to the but and some extra crispy brown phenolic at the joint and butt cap. The main feature of the cue is one of Eric's amazing shafts. I asked him what the ferrule was and he said "I don't know. Some dude sent me stuff to try and thats whats on here." So I just tell everyone its made out of a mysterious substance called Unobtanium. It has a Triangle tip on it and plays amazing. I have been working on a design for my dream cue for Eric for about a year now and finally have it figured out. My first concept cue. Till that one gets done I will be able to get my Sugar fix with this bad boy. Sorry for the horrid pic I was up against the deadline as usual and dogged it.

The final cue that I have been playing around with for the last 5 or 6 months is, hold in your gasps of horror.......a production cue. But it isnt your dads production cue. It is a very simple wrapless Mezz EC-7 with the WD-700 shaft. My friends Caroline Pao and Mika Immonen own Mezz USA and I was hanging out in their booth last year at the APA Nationals in Vegas just looking at their wares and shooting the shit. As I handled the cues I was amazed at the quality and feel of them. To me it is better than many custom cues I have handled. The shaft taper on the WD-700 shaft is perfect for me and the fit and finish overall is outstanding. Fast forward a few months and I had pestered Caroline enough that she sold me this cue. I like straight forward players cues and this one is just that. I tell everyone that will listen about Mezz and the quality product they make. Their EC-7 line is a tremendous value and they are sold by some of the best people in the game. 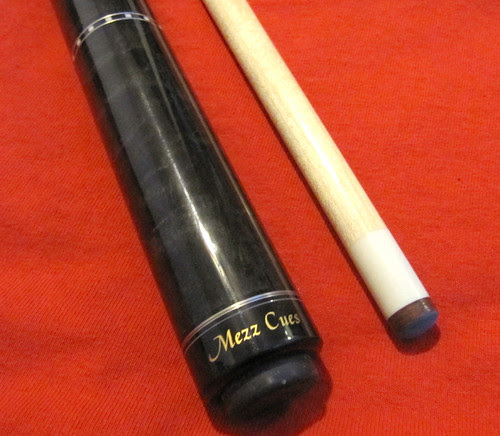 I will be packing up the Justis along with five tons of TAR gear in a few weeks and heading out for what I think will be one of the best matches we have ever done. On October 12-14 TAR 19 will feature Mika Immonen vs Shane Van Boening in a $10,000 entry winner take all 10 ball race to 100. The match is at Amsterdam Billiards in NYC. We have two of the biggest players going head to head in New York City. I am all jacked up for this one. If you are interested in watching the match in person or online via PPV streaming more info is available at www.theactionreport.com

Thanks to Samm for getting me off my ass and resurrecting this thing again. I plan to do a few more during the lead up to TAR 19. But we all know how that has worked out in the past....we'll see.

What I am listening to: Jamey Johnson's new album The Guitar Song just dropped and if you like old school, drink Jack till you cant see and go shoot stop signs country music it is the absolute mortal nuts. Here is a cut from the new release.

Posted by Justin Collett at 4:53 AM

Justin Collett
I like pool, action, and the people I meet doing both. Love me some cameras too.